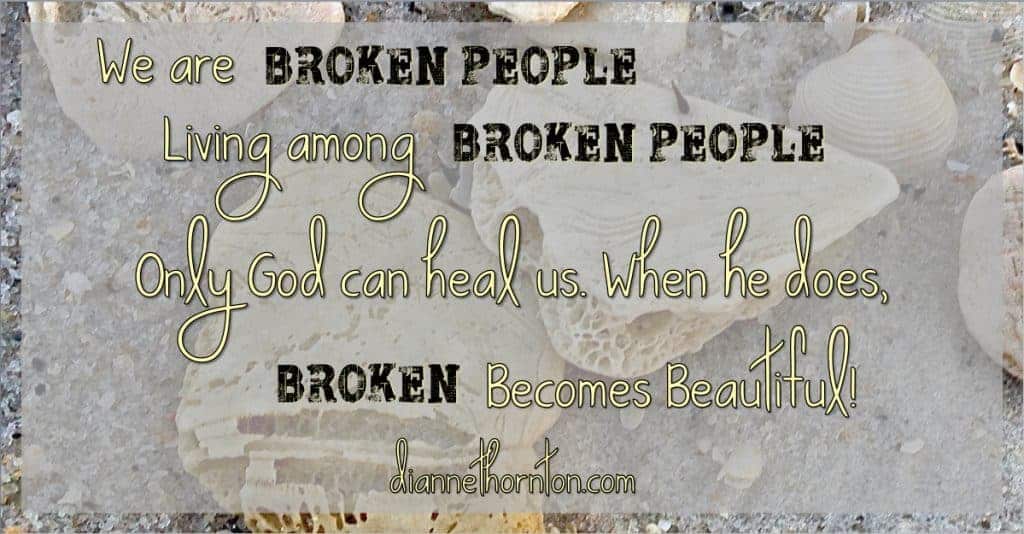 This year our family went to Disney World for Christmas. Yes, it was a delightful, magical time! We took our kids to Magic Kingdom when they were very young; we took them again and added Epcot when they were a little older. Now they are teens, and we took them everywhere. The wonder never changes, even with It’s a Small World! We came back through Pensacola and stayed for a couple of nights before coming home.

The first morning there, my husband got up for the sunrise and took my daughters with him. They came back to our room with several large, thick pieces of broken sand dollars. (If they were whole, I’m guessing they would be 5-6 inches in diameter with a center over a half an inch thick.) In Texas we find broken ones, too; but they are quite small and thin. So the next morning I joined them, hoping to find my perfect treasure (a whole one) by being out early.

I looked and looked, but found only broken pieces. Although beautiful in their own way, I was disappointed that I didn’t find what I was looking for. And as I stood on the sand, gazing at the clear, green sea, the Lord spoke to my heart. Why are you looking for a perfect sand dollar? Isn’t a broken one equally as beautiful?

It’s true. We tend to seek beauty in perfection, and are only satisfied once we find it. Upon closer inspection, though, what we really find is the imperfect, hidden beneath a facade. We hide unwanted curves under carefully crafted couture, facial blemishes beneath costly concealers. You name it, if our culture finds a flaw, it manufactures a way to mask it.

Sometimes the imperfect comes in the form of personal brokenness–a heart that is desperate and at the end of itself. This is the most painful to live with, and the most difficult to hide. Natural instinct tells us that being broken is not acceptable. We don’t always recognize it; and if we do, we often try to hide it beneath the veneer of activity and masked emotions.  It doesn’t matter if our broken lives are the result of an overdrive lifestyle or because of laziness; substance abuse, emotions out of control, or financial ruin … or heartache and personal loss.

God sees past all of that. He knows we are broken and in need of healing only He can give. And He wants to! When we come to the Lord, acknowledging the mess of our lives, He draws near to us (James 4:8), gives us His comfort, and begins the healing process. 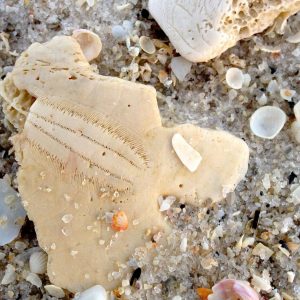 The Lord is close to the brokenhearted; he rescues those whose spirits are crushed. (Psalm 34:18)

The sacrifice you desire is a broken spirit. You will not reject a broken and repentant heart, O God. (Psalm 51:17)

He heals the brokenhearted and binds up their wounds. (Psalm 147:3)

The Spirit of the Sovereign Lord is upon me, for the Lord has anointed me to bring good news to the poor. He has sent me to comfort the brokenhearted and to proclaim that captives will be released and prisoners will be freed … To all who mourn in Israel, he will give a crown of beauty for ashes, a joyous blessing instead of mourning, festive praise instead of despair. (Isaiah 61:1, 3)

He has made everything beautiful in its time. (Ecclesiastes 3:11 NIV)

There is a difference in a sand dollar that is freshly broken, and one whose pieces have been worn soft with water and time. The first one is sharp and brittle. In its freshly broken state, it wounds others easily. The other has a completely different character. The rough edges have become smooth, new lines are created. It has a new purpose–sometimes providing safety and shelter for another sea creature.

That’s what God does for us. Sometimes we are not “put back together” the way we envision. Instead, God creates a new purpose for us–often putting us together with other broken pieces. With His love and grace, He heals our broken hearts and gives us a new start. In turn, we give other broken hearts lots of room to heal in a wide field of grace.

And the one sitting on the throne said, ‘Look, I am making everything new!” (Revelation 21:5)

This means that anyone who belongs to Christ has become a new person. The old life is gone; a new life has begun! (2 Corinthians 5:17)

I put my collection of broken sand dollar pieces on my desk as a reminder. It’s ok to be broken. It’s ok for others to be broken. We don’t have to hide our hurts. Instead, we go to the Lord and let Him heal us. Then we extend to others the healing grace we received from Him (2 Corinthians 1:3-7). What a great way to leave 2014 and begin a new year. Will you join me?

Below are several songs that I love that speak to the hearts of the Broken. When I am struggling with life, I remember something my mom told me over and over, “Nestle, don’t wrestle.” If you are feeling broken and bruised, choose one and listen to it. Nestle close to your Heavenly Father. He loves you so.

“Broken and Beautiful” — by Mark Schultz1

“Better Than a Hallelujah” — by Amy Grant2

Honestly, when I first heard this song, I didn’t like it. How could anything be better than offering praise to the Lord? Every time it came on the radio, I switched the station. One day I decided to listen carefully to the words–then I fell in love with it.

In 1 Samuel 13, King Saul was waiting for the prophet Samuel to arrive to offer sacrifices to the Lord; but Samuel was delayed. King Saul’s men became afraid because the nearby army was gathering to attack. In an effort settle them down and keep them from running away, Saul did not wait for Samuel. He wrongly assumed the priestly duties and offered the sacrifices himself. Two chapters later, Saul defeated the Amalikites, but did not destroy them completely, as God had commanded. He saved the best of the livestock as plunder and did not kill the king. When Samuel arrived, he confronted Saul with his disobedience and said to him,

What is more pleasing to the Lord: your burnt offerings and sacrifices or your obedience to his voice? Listen! Obedience is better than sacrifice, and submission is better than offering the fat of rams. (1 Samuel 15:22)

In Amy’s song, although a sacrifice of praise is beautiful, when we are in a mess and our lives are broken, God wants something else.

The sacrifice you desire is a broken spirit. You will not reject a broken and repentant heart, O God. (Psalm 51:17)

“The Broken Beautiful” — by Ellie Holcomb3

Thank you for reading and commenting on my blog this year! I’ve enjoyed getting to know you. It’s a blessing to me that you take the time to come by.

I’ve had fun and been challenged in many ways. I hope you have, too. More than anything, I pray that you have grown closer to Jesus this year and have fallen more in love with His Word to us. Indeed, it is sweeter than honey (Psalm 119:103).