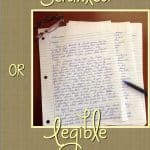 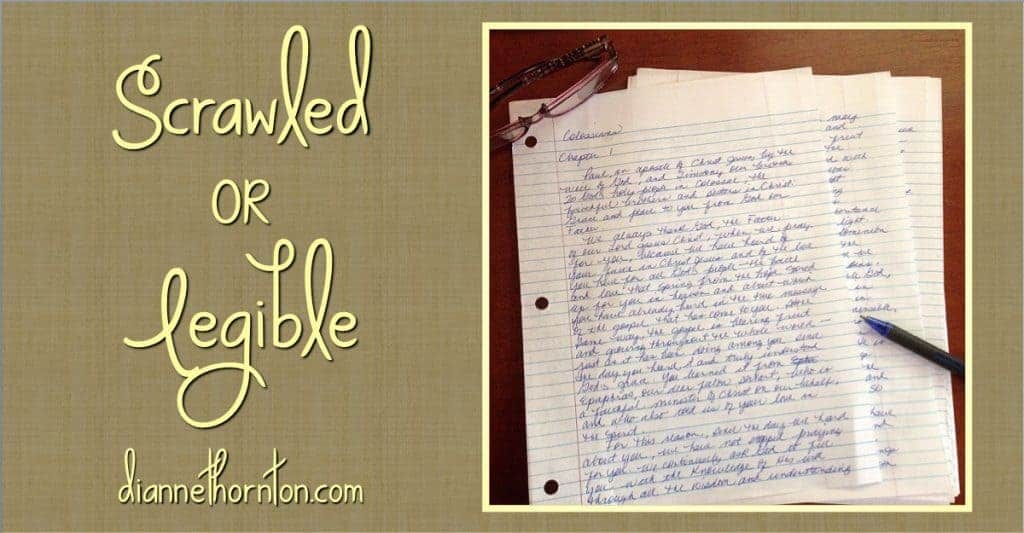 Soon after my husband and I became engaged, I began the inevitable–practicing my new signature. No longer would I sign, C. Dianne Strangmeier. I would sign important documents as Dianne Thornton. I couldn’t wait for it to be official! A couple of years ago I realized that I had become sloppy with my signature. Literally, it was a scrawl. My D was the only legible letter. It was a challenge, but I decided to take my time with my signature. The next time I bought groceries and was signing the card reader for my purchase, I was in a hurry. I wanted to scratch out my scrawl, rush to my car, and get home as fast as I could–legally, of course. 😉  It doesn’t take much time to sign your name, though. I paused, and tried to remember the joy of signing Dianne Thornton in the early days of my marriage.

I am in the last week of a Bible study on Colossians, and the assignment for yesterday was unusual: spend the next two days writing the book of Colossians in longhand. (!!! Are you kidding me ???) While writing, chew on Paul’s words.

So I began … With a few brief interruptions, it took me an hour and a half to copy two chapters. I had fun at first, making sure I maintained the proper flourishes unique to my handwriting. Eventually, though, it degraded. As the muscles in my hand and arm ached and burned, I began to have an appreciation for those who wrote the timeless words of Scripture. Not only the ones who wrote them for the first time, but those whose job it was to write and write and write.

The purpose of writing out the book of Colossians was to think more deeply about the words–as a form of meditation. Fresh insight surfaced. I think part of that was because I wrote Colossians in a different translation. I’m still getting used to the newer translation of the NIV. Having read the 1984 version so many times, I was numb to the words in Colossians 1:29, “To this end I labor, struggling with all his energy, which so powerfully works in me.” Clearly, Paul struggled in his ministry. The newer version of the NIV explains it this way:

He is the one we proclaim, admonishing and teaching everyone with all wisdom, so that we may present everyone fully mature in Christ. To this end I strenuously contend with all the energy Christ so powerfully works in me. (Colossians 1:28-29 NIV)

The words strenuously contend made me stop and look up their definitions in the original language. It’s the idea of toiling until exhausted, using every effort and every nerve to accomplish something. Add the word contend–and you have a fight on your hands. Which is how Paul viewed his efforts to promote the Gospel.

We ordered pizza last night. As I signed the credit card slip the driver gave me, I found myself once again rushing through the signature. I ended my scrawl and remembered.

My first thought was of the Christians suffering in the Middle East. They serve Christ–no, they don’t just serve, they fight for the cause of the Gospel–with every ounce of energy they have. The Gospel is advanced! But they suffer. Persecution, prison … even death. I don’t think most of us in the West really get it. I know I don’t. Maybe we are beginning to understand what’s at stake for believers when we read the news about ISIS or Pastor Saeed. Honestly, I would rather avoid the stories altogether. They are difficult and painful to read–which is nothing compared to the suffering they endure.

But the Lord is using friends to awaken in me the need and desire to pray faithfully for persecuted believers. And I believe He has given me an opportunity.

Every time I feel myself in a hurry to scrawl my name and get on with the business of my day, I want to slow down, write clean and legibly, and pray for those who are contending for Christ and the Gospel. A small start, yes. But it’s a place from which to grow.